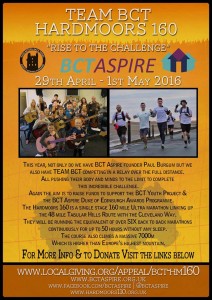 Team BCT are back with yet another massive fundraising activity taking on the epic Hardmoors Ring of Steele 160 mile Ultramarathon as a relay team, whilst Paul aims to complete the race in his own right. The team attempting to run over 500 miles in just 48 hours.

All the team will be pushing their body and minds to the limit to complete this incredible challenge. With each individual runner setting his own targets for the weekend and everyone attempting distance PB’s. Paul and the team will be aiming to raise funds to support the BCT Youth Project and our very own Duke of Edinburgh Awards programme.

The Hardmoors 160 is a single stage 160-mile ultra-marathon, which means the runners are running continuously for up to 50 hours. The route links up the 48 mile tabular fells between Helmsley & Scarborough before following the Cleveland Way back to Helmsley. This distance is the equivalent of running six back to back marathons. The course also climbs a massive 7000m which is higher than Europe’s highest mountain. 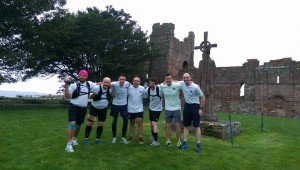 BCT Founder Paul Burgum said “Obviously after dropping out of the race at 120 miles last year I have a big of unfinished business, but to be back with our own relay team again is just amazing and inspiring me massively. It took a great deal of effort from all our fundraisers to gain our D of E license so this year we need more of the same to get the gear the kids need and also to fund the programme moving forward. But also just as importantly hopefully we can show the kids what is possible with a bit of hard work and positivity”. 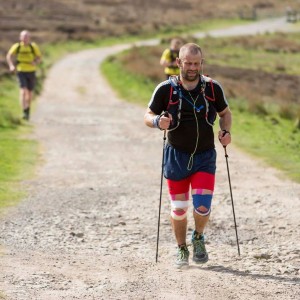 Last weekend the members of BCT Aspire’s D of E group offered their support to the race series as race Marshalls alongside Paul at the White Horse Event with the team manning a checkpoint and helping to look after some 300 runners. This was a chance for the guys to understand what the team running on their behalf are putting themselves through.

Team member Marc Massey said ” One of the main reasons I’m geared up for the event is because of the challenge itself. There’s no doubt that it’ll be one of, if not the hardest things I’ve ever attempted to do. I’m looking forward to taking on the challenge with some cracking people, but also in support of a cracking charity that’s been a large focal point of me getting behind the run and wanting to take part. I know it will be hard, but the sense of achievement once we cross that like will be second to none!”.

Fellow runner Dave Ailano said” As a former Scout I am aware of the benefits of youth groups for developing peer relationships and life skills. We need to support our youth and this D of E award scheme iis a great way of getting kids to reach their potential. I’m glad I can play a small part in this by raising money as part of this relay team.”

Supporters of the team will be able to follow the action live throughout the event via the GPS tracker that both Paul and the relay team will carry. We would love it if anyone of our supporters could make the journey across to the North York Moors to cheer on the team.

Parent & Volunteer Dawn Brown said “Our son has been attending BCT Aspire since January 2015. He was always a shy child who found it difficult making friends and socialising. He was diagnosed as a youngster with child anxiousness. Since attending the sessions he has never had an episode of this. He has significantly grown in confidence. His confidence boost has been noted by family and teachers alike. He has made some great friendships and his musical ability has also improved significantly. He loves attending the sessions and most importantly he is encouraged by the tutors.  I would like to thank everyone who is taking part in the Hardmoors challenge and raising funds for the BCT groups. I can assure you your efforts are much appreciated by the children and parents alike. Without you guys BCT would not be able to keep up the brilliant community work that helps encourage the youth if the community to achieve. You truly are remarkable.” 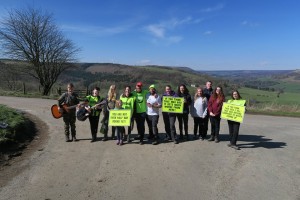 The team has also had another bonus with the legendary runner and fundraiser Tony the Fridge Morrison once again joining the team as one of Paul’s support runners. This is part of his own training to run 100 Great North Run’s with his fridge on his back once again.

The team is made up of a mix of experienced and not so experienced runners, but all aiming to hit their own race targets which are as follows: 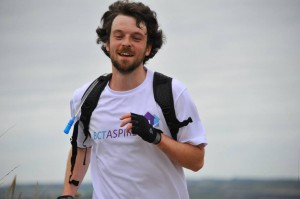 Messages of support can be sent to the runners via our twitter feed @BCTAspire and relayed to the team via the crew.

If you would like to support the runners by donating you can do so at the following link: 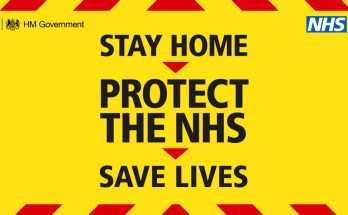 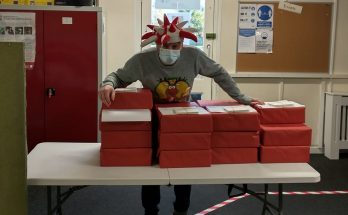 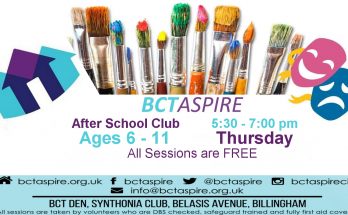